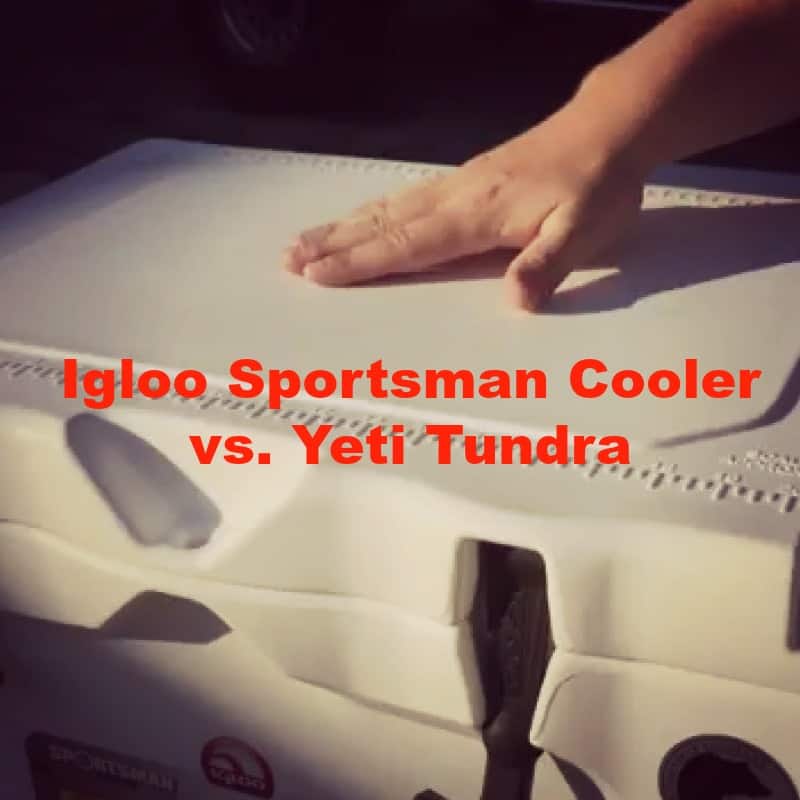 There is an adage that says that imitation is the best form of flattery, and the new Igloo sportsman coolers are a real-life example of this adage.

TL;DR: For my own personal use, I would spend the extra money and purchase the Yeti. I would prefer to have the peace of mind knowing that I have a top of the line cooler, with tested quality control.

In order to better compare these products lets look at the features that make the Yeti coolers different from traditional coolers. Yeti coolers are known for:

Now, let’s compare these features with those of the Igloo Sportsman.

The main differences between Igloo Sportsman Cooler vs Yeti Tundra are:

Further Reading: Why are Yeti’s so Expensive?

So as you can see, between some models the cost difference is significant. For example, you can buy a Sportsman 55 for the same price as a Yeti 20, and the Sportsman 55 is twice the size. Both the Yeti and the Sportsman promise ice retention of 5 days or more. Many ice retention comparisons have been done between the two brands and show that there is very little difference in terms of ice retention.

Results vary, some showing Yeti performing better, others showing Sportsman. However, the variance is small. Each test shows a difference of half a day better performance, or slightly more ice remaining.

Overall, the ice retention is so close between the brands that this point is moot in terms of selecting a better cooler. Neither cooler seems to dramatically outperform the other. 5-7 days seems about average for both brands.

There are several different exterior design features that make the Yeti different from other coolers. These have all been mimicked by the Sportsman’s line. Both the Yeti and the Sportsman have a similar exterior design. They contain flat lids with two lock points on the front corners and almost identical pull-down latches. In order to make a more educated decision let’s examine each design feature individually.

However, extra add-ons for the lid are available at an additional cost. These additions include a seat cushion in white or camouflage ($129.99 – $259.99) and a slip-resistant “Sea Deck” foam ($69.99 – $149.99). The Sportsman lid has a ruler with both inches and centimeters) and a raised non-skip cutting board area in the center of the lid. A lid cushion is also available for the Sportsman model for an additional price ($105.00).

The latches on both models are a ball and latch system. With a rubber pull that latches into a notch on the side of the cooler. The Sportsman latches are much larger than the Yeti latches, which make the hold a little firmer. However, the difference is not significant.

The tie downs on both models of coolers are relatively identical. They both have two ties down points in the center of the cooler and strap grooves in the lid to attach the cooler across the top. Therefore, this feature does not hold sway for either model.

The Yeti has a single pin/bolt that runs all the way across the cooler. The Sportsman has 2 hinges both held together with a large pin. There is some discussion among customers that the Yeti hinge is slightly stronger, due to there being one pin across the whole surface as opposed to two. However, the difference is marginal and neither of the hinge systems is likely to break with normal wear and tear.

The Yeti has about an inch more foam that the Sportsman. The Yeti cooler has 3 inches of polyurethane foam insulation along all sides of the cooler. The sportsman has 2″ foam in the lid and 1.5-2″ body foam.

The Yeti comes in 3 colors – white, desert tan and ice blue. The Igloo Sportsman comes in 3 colors – white, tan, and hot pink. It should be noted that the Yeti is called a desert tan, which is much lighter and pastel than the Sportsman tan color. Yeti also has customization for Collegiate designs and NASCAR logo designs place on the lid their coolers.

Both the Yeti and the Sportsman coolers are certified grizzly proof. Neither are resistant without padlocks being placed in the 2 front corners. So again this feature does not hold sway for either model. Now here is where the higher price of the Yeti cooler really does make a difference.

While both brands do have negative reviews and customer complaints. The Sportsman cooler appears to have more problems than the Yeti.

Right now, Yeti brand coolers have an average 4.6-star rating on Amazon, with some coolers having as many as 535 reviews. In general, people who buy Yeti coolers love them, and the number of issues with these coolers seems to be few.

The Sportsman, however, doesn’t have the best reviews on Amazon. This is especially true if you look at the whole range of coolers across different sizes. On average the Amazon ratings are around 4 stars or less, and they don’t have a lot of reviews. It appears that the Sportsman coolers are hit or miss in terms of quality.

Some reviews say that they are amazing. While others state that there are major problems with missing insulation (as seen by putting a flashlight inside the cooler, closing it, and looking for light), bubbling in the lid, and leaking around the drainage port.

It also appears that some people are having problems with the warranty on the Sportsman coolers. Both coolers offer a 5-year warranty on their coolers, which generally cover the structure of the cooler. However, from several Amazon reviews, customers have had problems returning or exchanging products.

One review went so far as to state: “If your looking for a high-performance cooler with a 5-year warranty, don’t buy this cooler. Igloo does not stand behind this product. I started a claim with igloo due to having an empty void in my lid and I got a lot of lame excuses of why it was not their fault. On my 3rd email response, I told them I’ll drill a hole and fill it up on my own with great stuff foam. Got no response.”

However, it appears that if the customer received a Sportsman cooler with good quality control the response was very positive. One reviewer stated: “Holds ice just as well as the higher priced brands. I actually prefer it over the others. Very well built and good price”. Another said: “Very Happy with the purchase, same quality level as trendy brands like Yeti but substantially cheaper.”

Igloo Sportsman vs Yeti – Which One Would I Buy? If we look at these two coolers and how similar they are if you receive a well-constructed Sportsman cooler it seems like a hard choice. Both coolers have similar specs, designs, warranty, and they seem to perform similarly under testing conditions.

The Sportsman is significantly less expensive than the Yeti cooler, and for some people that is a huge incentive to purchase the Sportsman. However, the Yeti seems to be slightly better constructed and has a much more supportive customer service system.

If you are willing to put the time into searching for a quality Sportsman cooler, I feel that it would be worth the money. I would only buy a Sportsman cooler after looking at it in person and ensuring that the quality is up to par.

Bottom Line: For my own personal use, I would spend the extra money and purchase the Yeti. I would prefer to have the peace of mind knowing that I have a top of the line cooler, with tested quality control. Kristin Reid is a full-time mom and outdoor. She loves to find and share products that are not only high quality and functional, but also useful for getting the family outdoors. She loves finding value when it comes to her outdoor gear and can discover a real deal anytime.

Igloo vs Yeti Coolers – Which is the Best Cooler Brand?

YETI Roadie vs Hopper – Which is the Best Cooler?