Grizzly and Yeti both make a great cooler for the ultimate outdoors person. Their products are extremely durable and do their jobs well. Both coolers are highly recommended, but they do have a few key differences that may affect your purchasing decision.

While Yeti has built quite a name for itself over the years, Grizzly has been making cooling products for over 30 years. Grizzly has a lot more experience making these types of products. Although, Yeti is so well known and sought after for a reason.

The main differences between Grizzly Cooler vs Yeti Cooler are:

What to Consider When Shopping

How long of a trip you are taking, how many people will be using the cooler, and what types of thing you will be packing will all affect how big of a cooler you may need. Day trips with less people requires a smaller cooler, but a few days with more people will require a large cooler.

Both Yeti and Grizzly are rotomolded. Meaning the shell of the cooler can withstand a lot more impact and generally lasts longer. You may also want to consider handle shape, closing latches, and extra features, such as design or a dry goods tray.

Grizzly and Yeti have been tested and proven to withstand a bear attack. That is extremely durable. Looking at how all the hardware is attached to the cooler may be another key factor to look at.

These coolers are set at very different price points. Make a budget for yourself and figure out what you really want and what you don’t need in your cooler.

With eight practical sizes, almost anyone will be able to find a cooler that meets their capacity needs. There is a 15 quart cooler that is perfect for a personal cooler to take to parties, hunting, or any other short trips you may be taking.

The sizes go all the way up to 400 quarts that would be awesome for a family taking a longer camping trip or to cater to every at the party.

The outside dimensions of the 40 cooler are 25 and half inches long, 16 inches wide, and 15 and a half inches tall. This is fairly average for a rotomolded medium-sized cooler. Making it just as packable as any other cooler. 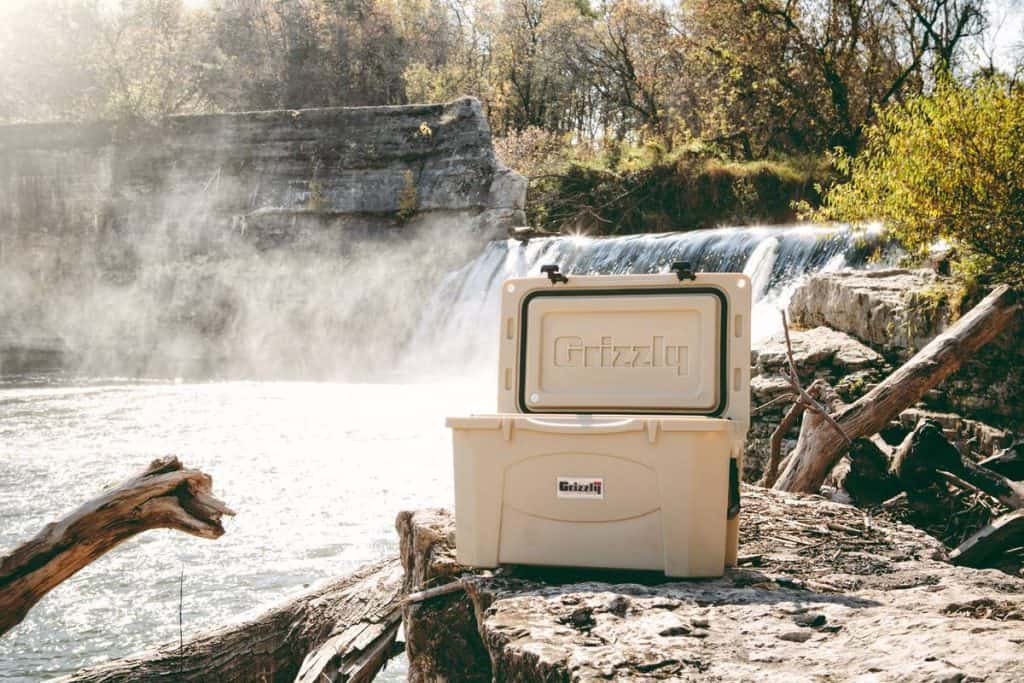 Even though you have more variety in sizes, the model number does not resemble how many quarts the cooler holds. The Tundra 45 actually only holds 37 quarts of space. It may seem like you are getting extra space, but make sure you find out what the actual capacity of the cooler is.

The Tundra 45, the most practical size, weighs in at 27 and a half pounds empty. Although this cooler is slightly heavier, the outside dimensions are about average. They are 26 inches long, 15 and a half inches wide, and 16 inches high.

While the Grizzly has a wider range of options with their smallest cooler being 15 quarts and their largest 400 quarts, Yeti has more overall options. Yeti has 4 more size options than Grizzly giving you the ability to be more specific in your choice of size.

Be careful when choosing a size in Yeti though. Yeti’s model numbers do not correspond with the size. When comparing similar models in Grizzly and Yeti, Grizzly’s 40 cooler actually holds 3 more quarts than Yeti’s 45 cooler. It seems to be the same in all other comparable sizes.

Another factor to think about is the weight difference. These coolers both have about the same outside dimensions, but the Yeti weighs more than the Grizzly. The Yeti weighs almost 4 more pounds, yet it holds 3 less quarts of capacity.

Almost all of Grizzly’s hardware is built inside of it. The hinge is molded into the framework and is secured with a stainless steel pin. Bear Claw closures require no hardware and simply wrap around a molded square shape to keep it shut. There are handles built into the sides along with nylon-covered ropes that are built into the cooler with hand-shaped plastic handles.

Grizzly coolers are made of Roto Tough rotational molding that makes the cooler stronger. You don’t have to worry about the outside of your cooler cracking or getting damaged. Environmentally friendly foam is pressure injected for insulation allowing coolness to stay in and heat to stay out.

Extra features that may not be needed, but are very convenient are added to Grizzly coolers. They include a dry try for anything you don’t want getting wet, an embossed ruler on the lid, and non-slip rubber feet. There is also a 2 inch drain hole in every cooler and a full length drain channel to increase draining speed.

The design of the Grizzly is a contoured design that looks very edgy. You get a large variety of colors with 10 color choices ranging from sandstone to lime. Grizzly’s also features a rubber gasket that goes around the length of the lid to make a perfect seal so no air comes in or out.

Grizzlys are only made in the U.S.A.

Yeti coolers are also rotomolded. This means that the outside material is evenly dispersed and has no gaps that could turn into cracks or broken pieces on you cooler. Polyurethane foam is pressure injected into the walls to make sure the inside stays cool.

Other features that the Yeti features are non-slip rubber feet to keep you cooler in one place, molded in handles that lay flat to the side, and a freezer quality gasket circling the lid. You don’t get a ton of extra features, but you get everything that is needed to make your cooler do its job well.

Yeti has a sleek design without much contouring that is super easy to clean. There are six color choices in pastel tones that stand out.

Yetis are built in the U.S.A and the Philippines. Grizzly and Yeti have a lot of similarities in construction. They are both rotomolded, pressure-injected, and have freezer quality sealing. You can trust that both of these coolers are going to perform fairly equally.

The main differences are in design and amount of features. Grizzly clearly has more features, such as the dry tray, an embossed ruler, a better draining system, and more colors. Grizzly’s rope handles are also more comfortable with hand formed handles rather than Yeti’s simple cylinder handles. Yeti features a sleeker design that may be easier to clean than Grizzly’s contoured outside.

With Yeti, you never know if you are going to be getting a cooler made in the Philippines or the U.S.A. Grizzly makes all of their coolers in the U.S.A. If supporting businesses that keep their manufacturing in the U.S.A. is important to you, Grizzly is the way to go.

The Bear Claw closures themselves are very durable being made out of rubber, but they aren’t actually attached to the cooler. While that makes cleaning easier with easy removal, it also means that you could easily lose the pieces.

Roto Tough rotational molding makes these coolers bear-proof. They have been tested and proven to withstand a bear attack for 60 minutes. Making it an ultimate camping cooler. The cooler was even still usable after wards.

Grizzly’s coolers come with a lifetime warranty. If anything does end up happening to your cooler, you can easily return it and get a brand new one at any time. Making this cooler a cooler you will have for a lifetime guaranteed.

Explained in the construction section is Yeti uses locked in pins to hold everything together. The T-rex latches, the molded hinges, and the rope handles are all lock pinned in. You never have to worry about anything coming loose or stripping, but with a ton of stress your pins may break. That’s very unlikely though.

Yeti coolers come with a 5-year warranty. That gives you a lot of time to exchange your cooler if anything breaks. Although, it seems nearly impossible.

Grizzly and Yeti both have pros and minor cons to the durability of their ability to hold everything together. While most of everything is built into the Grizzly, latches are not and you must keep an eye on them. The Yeti’s locked in pins aren’t quite as nice as everything being built into the cooler.

Both brand of coolers are rotomolded keeping the framework of these coolers extremely durable. They can both withstand a bear attack and come out useable in the end. These coolers will equally hold their functionality.

The main difference in durability for these coolers is the warranty. Something can always happen to one of these coolers, so you need a good warranty when making such a large investment. Grizzly’s lifetime warranty clearly outcompetes Yeti’s 5 year warranty.

Prices for Grizzly coolers run from $124.99 to $724.99. These rotomolded, pressure injected coolers are not cheap. After all, they do hold ice for a whopping 6 days compared to a cheap styrofoam cooler that holds ice for maybe one day. These are made for people using cooler multiple days though.

Grizzly includes lots of extras in their price, like a dry foods tray, an embossed ruler, and a lifetime warranty.  Making sure that you are definitely getting what you are paying for. You can also purchase extras, including colored Bear Claw latches.

Prices for Yeti coolers run from $199.99 to $1,299.99. Yetis can hold ice for 5 to 7 days and withstand a ton of stress. You can’t say that about cheaper coolers that don’t hold ice nearly as long and may break from too much weight.

You can purchase lots of extras with you Yeti, such as a dry foods tray and dividers. There is not much included that isn’t a necessity in these coolers. You are paying for a simple design that does its job abundantly well.

Why are Yeti Coolers so Expensive?

Even though their performance is about equal, Grizzly has a lot better features than Yeti. They include things like a dry foods tray, a larger drain hole, and comfortable handles that the Yetis do not. Grizzly’s included warranty is also much better than Yeti’s with a lifetime warranty compared to a 5 year warranty.

You also get more space at comparable models. Grizzly’s 40 cooler has 3 more quarts of space than the Yeti’s misleading 45 cooler. The 40 cooler also weighs less than the 45, even with the extra space inside.

I can say without a doubt that the Grizzly cooler series outperforms the Yeti cooler series. Grizzly has much better features, including more internal space, a better draining system, comfortable handles, and convenient extras.

Although Yeti is much more expensive, both coolers seem to be equally durable and perform the same holding ice around the same amount of time. Grizzly coolers actually weigh less than comparable Yeti coolers, even with equal performance.

Depending on how much space you need, you could go either way with the variety of sizes. If you need more of a precise amount of space, Yeti may be the better option in this field. If you don’t need you space super specific, Grizzly is still a better option.

With Yeti, you are paying more for the brand name than the ability of the cooler to fit your needs. Grizzly overall gives you everything you may need without making you spend a fortune. Between the two brands of coolers, Grizzly outperforms the Yeti in every aspect.