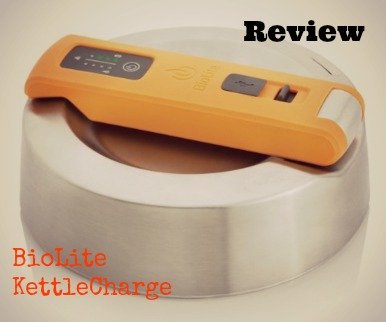 Not that long ago you could go hiking without having to worry about electricity, beyond a couple of spare batteries for your flashlight. That’s all changed very quickly, and now few of us venture off the beaten track without phones, GPS handsets, digital cameras and maybe even a tablet computer in our adventure backpack.

All these gadgets need power and often you can’t even carry extra batteries – they rely on the one that’s built in.

Power banks can be a short term solution, but their own battery life is limited and if you’re away for more than two or three days you’re probably going to run out of stored energy. That means some way of generating your own off-grid power would be a real advantage.

In this BioLite KettleCharge review, I’ll break down how it works and if it’s worth it.

The most popular portable generators are solar panels, but these have limits of their own. The biggest is the most obvious – they don’t work without sunlight. If you find yourself urgently needing a charge after the sun’s gone down you’re out of luck, and bad weather can have the same effect. Luckily there are alternatives.

A while back we looked at the BioLite Campstove in our Top 5 camping stoves article, a solid fuel burner with a built-in thermoelectric generator. This is capable of charging anything with a USB connection while you cook, and it’s pretty effective. Solid fuel stoves aren’t everyone’s top choice though.

They can run on any combustible biomass you find lying around but they’re bulkier than a gas stove and even more so with a generating unit attached. A lot of people will still prefer a gas or Coleman stove, and so far there’s no way to generate power from one of those.

Except now there is, sort of. BioLite have come up with a new solution that can create electricity from any stove. It’s a handy accessory for whatever stove you prefer and has potential uses that go well beyond backpacking.

This handy device is the BioLite KettleCharge, and as the name suggests it’s a portable kettle with charging capability.

The KettleCharge is a compact, modern-looking camping kettle. It’s circular and quite flat – less than three inches high with the handle folded down. It is pretty heavy compared to most kettles though, at almost exactly two pounds.

The basic design is simple; there’s no real spout and no removable lid, so you fill and pour through an opening in the raised rim. When the handle’s folded down the end of it closes this opening, but it doesn’t seal it – you won’t be able to use the KettleCharge as an extra water container.

The folding handle is one of the kettle’s most distinctive features. It’s molded from yellow plastic and it’s a big, chunky item. For packing it hinges down flat across the top of the kettle, but in use it can be lifted to about a 45 degree angle. That makes it easy to grasp, and gives a natural angle for pouring.

More importantly the handle also holds all the unit’s electronics. That shows up in the panel near the top, which holds a power button and two rows of LED indicators. Further down there’s a cover which conceals a USB port. These components let you make use of the kettle’s charging system, which is mounted in the base.

Like other BioLite products the KettleCharge works on the Seebeck Effect thermoelectric technology, which uses two layers of conducting material with slightly different properties.

When one side of the generator is hotter than the other a voltage is produced across the layers and that provides power to the systems in the handle.

Because the generator forms the base of the kettle the top side is kept at or below boiling point by the water inside, while the bottom side can be heated to much higher temperatures by the heat source.

That creates the temperature difference the generator needs to produce electricity, and the systems in the handle then use that to charge your devices.

Each side of the display panel has a row of four LEDs. The row on the right shows the charge status. As well as the circuitry the handle contains a 1,250mAh rechargeable battery, which can store enough power for a partial charge in an emergency.

It’s enough to let you charge your phone for about 15 minutes, which is enough to make a vital call. Meanwhile the lights on the left show the temperature of the base. If it rises high enough to put the system in danger a triangular red LED at the top of the display lights up and an alarm starts to beep.

That’s your signal to either add more water or take the kettle off the heat and let it cool down slightly; otherwise there’s a change of damaging the generator. Even if you’re just using the KettleCharge to boil water you need to monitor the heat to avoid damage, but it does work well; the broad, flat shape gives plenty of bottom surface for the stove to heat up.

You won’t have any problem staying supplied with hot drinks. On the other hand you can do that with an old-fashioned $15 camp kettle; the extra cost of the $149 KettleCharge goes towards its generating capability. So the question is, how well does that work?

How Does the BioLite KettleCharge Actually Work

Actually drawing power from the unit is simple; all you have to do is plug a USB cable into the port on the handle, then connect your USB device. There’s no worry about having your charging cable over a hot stove either.

The KettleCharge comes with a heat-proof extension cord; plug that into the kettle, then connect your standard cable to the other end to keep it safely away from the stove. Then plug in your device and the KettleCharge will deliver up to 5 volts and 2 amps, for a total power output of up to 10 watts.

The problem is the “up to”, because as BioLite state, output depends on the strength of the heat source. To get the full 10 watts you’ll need a powerful stove but if you have one it should charge your devices as fast as a power outlet.

A simple gas stove might deliver less than half as much power, though. If you’re planning to keep multiple devices fully charged the KettleCharge is going to struggle to keep up – it will do it, but you’ll get through a lot of fuel and spend plenty time boiling water you don’t really need.

BioLite stress that it shouldn’t be placed on a fire, either – it’s only for use with controllable heat sources. For a long trip it’s going to be difficult to support more than a single device from this product. On the other hand, if your main concern is being able to recharge a phone in emergencies the KettleCharge is ideal. Unlike a solar panel it’s independent of weather, so if your battery dies in the middle of the night and you have an urgent call to make you can quickly generate enough power to do that.

Apart from the variable power output there are two minor issues with the KettleCharge. One is that, on a high heat, it tends to boil over a lot thanks to the lack of a spout. You can lose a lot of water while your equipment is on charge, and frequent topping up will be necessary. The heavy thermoelectric generator in the base also retains heat, so while a titanium kettle – or even a traditional steel one – can be packed away a couple of minutes after you take it off the stove this one is going to need a while to cool down first. Overall, though, it’s a well designed and effective product that does what it’s designed to do pretty well.

NOTE: A backup use case might be for folks living in remote areas with frequent power outage issues.

Verdict: Expensive and can struggle to deliver a lot of power, but ideal for topping up batteries and very useful for emergency preparedness. Check out this listing for discounted pricing.

Slide Belt vs Mission Belt: Which Belt is Best?

The Best Camping Axe for the Outdoors – 6 Top Selections