The Top 3 Best Utility Knives for the Great Outdoors

A key element to any over-the-road bicycler is their “emergency pack” which includes a hand pump, spare tire tubes, an assortment of wrenches, die-cast aluminum knife etc. If something were to happen to the bike on a long ride the kit works as a sort of all-in-one safety net that helps them make the proper fixes and get back on the road. You may go hundreds of miles without ever having to make repairs but having the tools to do so is a much-coveted safety net.

In many ways, an outdoor heavy-duty steel utility knife with a liner locking mechanism works very similarly to the cyclers kit. On a camping trip or just when working outdoors a quality serrated blade knife can get all sorts of jobs done while resting discreetly in a pocket, hanging on a carabiner from a belt loop or storing it in special built-in storage for knives and other camping accessories.

Many people grab their stainless folding utility knife in the morning just as they would their car keys and cell phone, almost as part of the daily essentials since they are belt clip and ergonomically designed to be kept in your pocket.

For everything positive that an adequate stainless utility knife can bring to the table, it’s important to remember that not all pieces are created equal. A poorly constructed utility knife could have you spending more time taking it apart and putting it back together than actually using the unit. Plus, it’s always embarrassing when another person gets fed up and cuts an errant thread with a butter knife while you awkwardly spend 15 minutes fumbling trying to unleash your cutting dragon.

The quest is to find three mid to high-end utility knives with liner lock and compare them to see what constitutes a must-have feature and which are just costly and unnecessary.

It’s important to remember that an easy outdoor utility knife with ergonomic handle and locking mechanism is much more than the sliding blade contraption contained in every contractor’s tool pouch, true luxury piece such as stainless steel blade is used in hunting, hiking, fishing, and in some cases for actual survival (especially with the seemingly imminent zombie apocalypse on its way)!

Three Features to Look For

So what makes for a competent and efficient utility knife? It has to be much more than blade sharpness similar to kitchen utility knife as that can and should always be maintained by the user. Ideally, the perfect utility knife should have cut versatility similar to heavy duty kitchen knives in that it could saw, fillet, gut, skin, etc. but that might not be feasibly sized for convenient carrying – which is another key feature.

The best knives work almost as a multi-tool in that they have dual (or more) functions, are somewhat convenient to carry, and finally are durable. What many knife aficionados also look for are:

We think we’ve found 3 products that ‘make our cut’ so to speak and here’s how they stack up against each other. 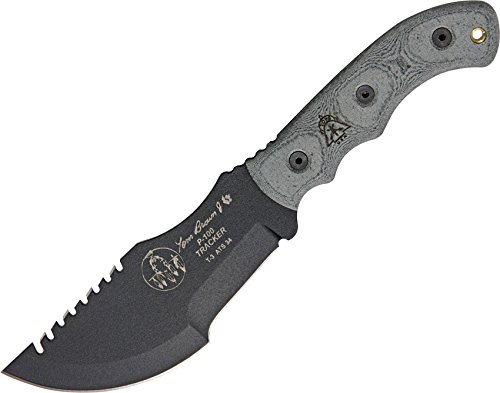 There’s a good bet that almost every knife collector / user / appreciator has a Tom Brown tracker amongst their inventory. It’s largely regarded as the Cadillac of utility knives for a number of reasons from the unique blade design to the compact size to the multi-use functionality.

The Tom Brown Tracker is much more than a cutting knife as it’s actually a survival tool with numerous functions packed into a relatively small package.

One thing to note about the Tom Brown Tracker knife is that it doesn’t follow the mantra of ‘bigger being better’ as many models do. In fact the cutting sheath itself is only 4-1/4” long although the entire blade is more along the lines with industry standards at 6-1/4”.

The multi-functionality is evident with 2.5” of carving blade to go along with 3.5” of chopping blade which including handle makes for a 11.5” long piece. The cutting surface is forged from a 1/4” 1095 high-carbon alloy which is also coated in a traction epoxy for rust prevention.

The Micarta handle is stylish but mainly functional with multiple palm grip locations as well as different finger slotting. The Tracker weighs almost 2 pounds, which in the utility knife world is kind of sluggish but many people have put that weight to their advantage in labor-intensive jobs. 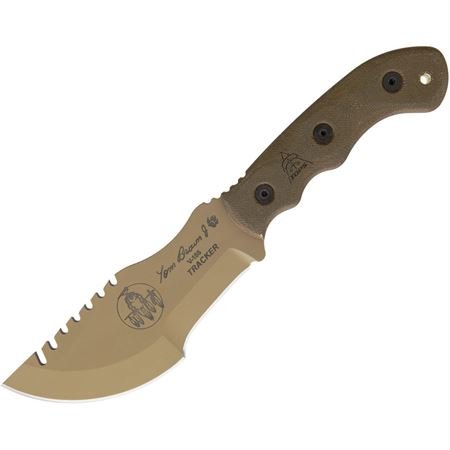 What sets apart the Tom Brown Tracker from its contemporaries is function. The piece was designed by famed survivalist Tom Brown Jr. based on his frustrations in finding an all-in-one piece that could do everything he needed.

The result is a blade that cuts through wood like hot butter and a saw edge that will take down the most intimidating of saplings. Versatility is key with the Tracker as its metal blade is perfect for striking against flint to start a fire and the durable handle can be used to break glass.

The Tracker can carve tools out of wood, gather campfire, and clean, cut and gut fish and game – everything you’d want in a utility knife. There is one drawback though – a $289.00 price tag. However, I’ve been able to find it here for close to 30% off. 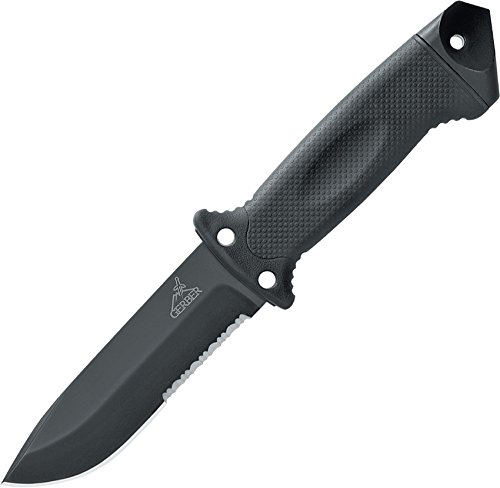 Whereas the Tom Brown Tracker knife better delivery for almost $300, many survivalist experts are calling the Gerber LMF II the best piece available for under $100.

The Gerber EAB Lite with carbon steel is another one of the must-have knives suggested for any camper or hiker’s utility pack as it serves as not only an efficient back-up plan but also an inexpensive first cutting and surviving option as well.

Nothing really catches your eye about the Gerber LMF II but the real beauty of the piece may be in its subtlety. Available with either a coyote brown (LMF II Survival), infantry green (LMF II ASEK)  or sleek black (LMF II Infantry) handle the LMF II is a 10” survival knife with a 4.84” blade.

The LMF II weighs about only half as much as the Tom Brown Tracker (11 ounces to 22 ounces) which helps in not only carrying but also self-defense. The blade is made up of a 3/16” 420HC high-carbon steel and the design is drop-point (convex curve) which adds to the durability. 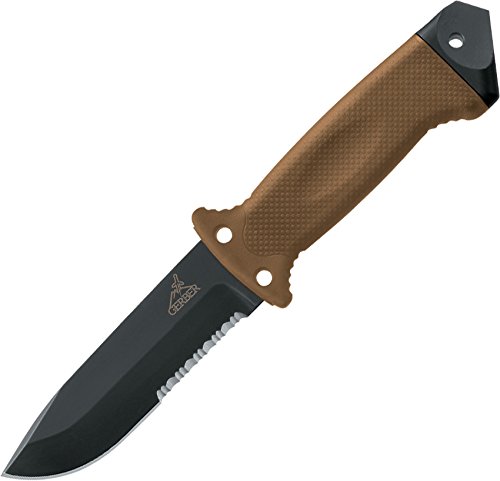 At first glance, the LMF II may seem basic but there’s very much more than meets the eye. The knife was designed by a former military man and is meant to be as adaptable as the person using it. From the sharp point to the cutting blade to the serrated sharp blade edge there’s not a situation in the woods or in life where the LMF II can’t answer the bell.

The knife is a strong and durable cutter that can go through wood or bone and even includes a sharpener built into the sheath. The LMF II also features a stainless steel buttcap that can be used in self-defense, to break glass when trapped in a vehicle, or as a hammering tool.

The strong buttcap is not just ‘there’ it’s designed to be used as it’s separated from the tang so that the knife absorbs the shock and not the users hand. Grooves built into the end of the handle and a well-placed hole also allow the knife to be converted into a spear for easier hunting.

All these features and available for under $100 in most markets ($140 retail) and it’s hard to find a better utility knife for the money. It’s available right now for just $60 here.

While the Tom Brown Tracker and Gerber LMF II utility knives are definitely elite, they still have some limitations from being a fixed blade piece. Some users simply don’t want to have the burden of a sheath on their hip or want to more covertly store their knife and prefer a folding model.

A utility knife that folds up does sacrifice overall usage strength but at the same time it allows for a more ‘Swiss Army’ approach in adding more features. Perhaps the best example of a folding knife that still retains survival functions is the Tool Logic SL Pro 2 which is available for under $40 in most markets and $33 online here.

The blade of the SL Pro 2 is only 3” long but made with a 1/2” 420 J2 high-carbon steel that is razor blade sharp. The knife opens easy (one hand) thanks to an oval hole in the blade that is exposed when closed. The carrying length of the knife is only 6-3/4” which makes it a perfect retractable knife for pocket carrying thanks to the ergonomic design although lanyard holes and the stainless steel pocket clip provide toting options. 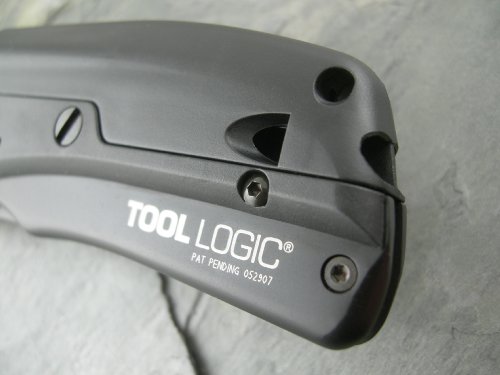 What sets the SL Pro 2 apart from the other two utility knives is it’s wide range of use via the extra tools provided. For example the SL Pro 2 also features a white LED flashlight and an emergency signal whistle. On top of that there is an integrated magnesium alloy fire starter that kicks off sparks over 2500° for survival in a multitude of conditions.

It’s hard to pick a ‘winner’ in this particular utility blades knife comparison because each piece would be perfect for the job intended. The Tom Brown Tracker is a high-end durable knife with a serrated blade that can fulfill a number of needs when camping and plus the design is ergonomic and allows you to put it in a storage compartment or simply take it with you.

The Gerber LMF II is a unique knife for its price range as it can operate great in lifesaving conditions while also performing more than adequately around a campground or hunting location.

The Tool Logic SL Pro has fire starting and emergency alert capabilities that the other two knives just don’t offer – something you hope you never have to use but which can be beneficial nonetheless (not to mention at a reasonable price tag).

In the end, perhaps the best approach is to keep theretractable Tom Brown Tracker on your person, the SL Pro in your pocket, and the LMF II in your bag for backup and buy all three. Other great options to try are the Eab lite and the Milwaukee fastback utility clip knife which are for sure worth the buck.