There are as many reasons for carrying a knife every day as there are people who do it. With a good knife in your pocket you’re always ready to open a stubborn package or cut the seat belt that’s holding a car crash victim in place – it’s one of the most versatile tools ever invented.

A knife makes many jobs easier, and without one others can’t be tackled at all. If you’ve invested in an everyday carry knife you’ll probably find yourself using it every day – either that or someone will be asking you to borrow it. It’s amazing how often people who don’t approve of carrying knives end up turning to someone who does.

Knives come in a bewildering choice of styles and sizes, but for everyday carry the realistic options are a lot more limited. A large blade is too heavy and bulky to be carried unobtrusively; unless you work outdoors you generally want something that can be tucked away in a pocket instead of hanging from your belt, and that rules out most fixed blade knives.

A folder is what you’re looking for. Luckily there are thousands of folders available, including a lot of excellent EDC blades.

A small to medium size folder can carry out most of the tasks you expect a knife to accomplish. You need a blade that retains its cutting ability and has a long enough cutting edge to be useful on a daily basis, with a bit in reserve for emergencies.

It needs to be strong enough to let you work safely, with a solid, positive lock that’s also easy to operate. You might have special requirements like a fine point for precise work, or a serrated section for slicing rope and strapping.

A Quick Primer on Selecting the Right Knife

For a lot of these factors there’s no right answer; it’s down to personal preference – what you like and what you’re used to. The right combination of features is something only you can decide, but here are the key points you have to decide on:

Don’t lose sight of what you want an EDC knife for. It’s a tool that will slip into a pocket and be so unobtrusive you won’t notice it’s there until you need it. A common mistake is to choose too large a knife. Then it starts to get left at home because its size or weight is annoying, until one day it’s urgently required and not there.

If you spend a lot of time in the woods you’ll need a big, solid blade for heavy cutting, chopping and batoning – but your EDC blade isn’t it.

“Get a belt knife as well, and carry that when you need it; your main knife should be with you all the time.”

Even within those suggested size limits there are hundreds of quality folders available, but Kershaw knives have been popular choices for years. There’s a reason for that – they’re truly excellent, blending design, materials and workmanship into a range of superb tools. One of the most popular right now is the Skyline, a highly serviceable EDC that won’t break the bank.

About the Kershaw Skyline 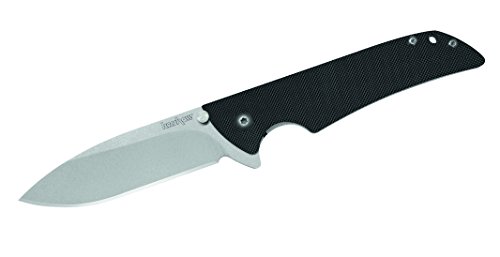 With its 3.1 inch blade the Skyline comes in towards the lower end of the EDC size bracket, but you’ll soon find the blade has a lot more cutting power than you might expect. Open, it measures 7.4 inches overall. What you’ll really notice is how slim and light it is – an important feature for something that’s going to live in your pocket every day.

The Skyline isn’t an expensive knife – the list price is $74.95 but realistically you can pick one up for less here – but it has a quality feel to it. Everything is nicely put together. Let’s look at it in a bit more detail.

The Skyline’s handle scales are flat, with a fine checkered texture covering the entire surface. This makes for a good grip, even with wet hands. The handle shape gives even more assistance with this. There’s a deep finger cutout just behind the blade pivot, and the forefinger sits naturally in there to lock the blade firmly in your hand.

It’s set up for the standard saber grip but doesn’t get in the way if you’re using an alternative grip. The weight is slightly biased towards the handle but this isn’t really a big deal with a knife this size. The whole thing only weighs 2.3 ounces, so you’re definitely not going to suffer any fatigue from its weigh distribution. The balance also seems to make it sit more comfortably.

The handle’s construction is slightly unusual. Most composite-handled folders have two liners; to reduce bulk and weight the Skyline only has one, which includes the lock. To avoid friction the blade pivots between two brass washers, so it’s not directly contacting the handle scales at any point.

There’s also a plastic spacer at the opposite end, and the whole knife is held together with three screws including the blade pivot. These are Torx-headed, which is a slight irritation – a standard straight or Phillips screw is easier to work with.

The pivot seemed to loosen slightly over a period of a couple of weeks, but after finding a Torx driver and securing it with a spot of Loctite there were no more issues.

Moving on to the blade, this is a conventional drop point with a back that starts curving down about half way along. The false edge is beveled but not sharpened, giving a slim point that’s perfect for detail work. In fact the whole blade is slim – it’s less than a millimeter thick.

It doesn’t feel flimsy though, because the   Sandvik 14C28N it’s made from has been described as a budget super steel. It easily outperforms most other blades you’ll find at this price, holding an impressively long-lasting razor edge.

The blade has a prominent flipper that, when it’s locked open, matches up with the handle cutout to double as a half guard. There are also two thumb studs but they’re not really a lot of help in opening it – they sit too deep inside the cutout to be easily reached, especially if you have gloves on.

Once you’ve started opening it with the flipper it’s easier to just flick it open the rest of the way.

Liner locks are a simple and effective way to keep a blade from closing unexpectedly, and this one works just as you’d expect. It locks the blade up very positively and is easy to operate. 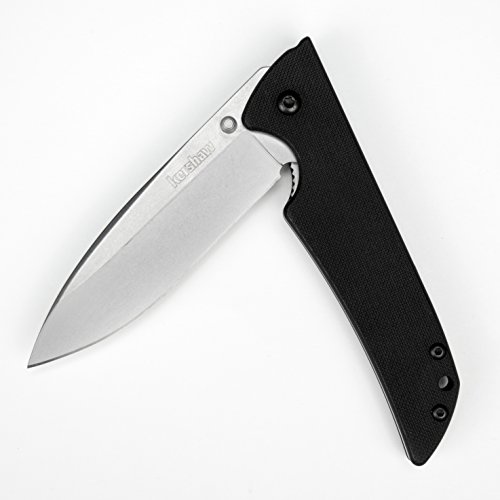 Kershaw have added two carriage options here. There’s a lanyard hole at the back end of the handle, and a sturdy pocket clip. Two Torx screws allow the clip to be repositioned for tip up or down carry. In either direction the knife sits quite high; this makes it slightly more conspicuous if it’s clipped to your pocket, but does make it easier to deploy.

However the handle design cuts down your options here. Because the clip screws through the handle scale and into the liner, it can’t be positioned for left hand carry. That’s going to annoy some people.

Overall this is a tough and highly functional knife with a high quality blade, and its size and weight make it perfect as an EDC choice. It’s also very attractively priced, while still having all the class that comes with the Kershaw name. There’s a reason it has so many rave reviews all over the internet.

Verdict: A really competent slimline slicer. As an everyday knife this one is very hard to beat.

If the Skyline doesn’t seem like quite the right fit for you, here are some close relatives to look at:

Kershaw LEEK – A slightly heavier knife, with anodized alloy handle and a thicker blade. It’s still compact enough for EDC though. You can read my full review of it here.

Benchmade 15031 North Fork – A touch shorter at 2.7 inches of blade, this uses Benchmade’s Axis Lock to secure it. Rock solid and very, very sharp. Check out the full review here.