A Review of Ontario Rat 2 Survivalist Knife: Is This the Knife You’ll Need?

If you spend a lot of time outdoors you’ll have learned long ago what gear doesn’t really earn its keep and can be left behind. You’ll also know the items that you just wouldn’t leave home without, and the chances are that a good stainless or titanium knife is at or near the top of that second list.

Nothing pays its way quite like a reliable blade. Whether it’s an EDC tool that’s never out of your pocket, or the hunting knife that you rely on in the woods, it’s pretty much the one essential tool in any environment.

How do you choose a decent knife?

When you have a decent knife you can go a long way towards providing yourself with everything you need to survive; it will let you make other tools, traps or shelter, and makes it a lot easier to prepare fire-starting materials. If you’re stuck in the wilderness with nothing but a knife and some outdoor knowledge the chances are you’re going to survive; without one, you’re probably in serious trouble.

In a pinch, any knife is better than none, but obviously you’re better off with good quality and functional blades such as one made of carbon steel or stainless steel that you’re comfortable with. Another important thing to consider is that no matter how good a knife is, it won’t help much if it’s in the drawer at home because you got fed up carrying it.

So you need to choose a knife that you can comfortably have on you whenever you’re likely to need it. For camping or hunting, a substantial belt knife can be carried quite easily. For everyday use, though, unless you work outdoors it’s not usually practical to carry a sheathed knife on your belt. That means you’re probably looking at a folder of some kind.

So you need to choose a knife that you can comfortably have on you whenever you’re likely to need it. For camping or hunting, a substantial belt knife can be carried quite easily. For everyday use, though, unless you work outdoors it’s not usually practical to carry a sheathed knife on your belt. That means you’re probably looking at a folder of some kind.

Folding knives have the great advantage of being compact, so they slip easily into a pocket. That means they can be discreetly carried, but are still quick to deploy when you need them. Obviously there are compromises; a folder will never be as strong as a fixed-blade knife, and you’ll usually have a shorter blade.

A good folder can still handle most everyday tasks, though, and in fact, many people are happy to carry one as their principal blade even when camping. The best solution is probably to have two knives – a smaller mid-sized folder for EDC use and precise smooth cutting, and a larger belt knife for chopping, batoning and other heavy work. So, if you want to have a dependable knife, you’re basically going to need a good folder either way.

A good folder can still handle most everyday tasks, though, and in fact, many people are happy to carry one as their principal blade even when camping. The best solution is probably to have two knives – a small or mid-sized folder for EDC use and precise cutting, and a larger belt knife for chopping, batoning and other heavy work. So, if you want to have a dependable knife, you’re basically going to need a good folder either way.

If you see your pocket knife as a backup you might be tempted to economize on that and invest more in your belt knife. In fact, that’s probably a mistake. A cheap Army surplus kukri or machete will easily beat most expensive custom hunting knives for heavy work, but a cheap folder is likely to fail the first time you put any stress on it – and you could get pretty seriously injured when it does.

Your pocket knife is such an important piece of equipment that it’s worth spending some money to get one you can really rely on.

On the other hand, if you can’t afford to spend a couple of hundred dollars on a knife, don’t worry too much. You can still get a perfectly serviceable one for a lot less than that. One that’s well worth looking at is the Rat 2, from the Ontario Knife Company. 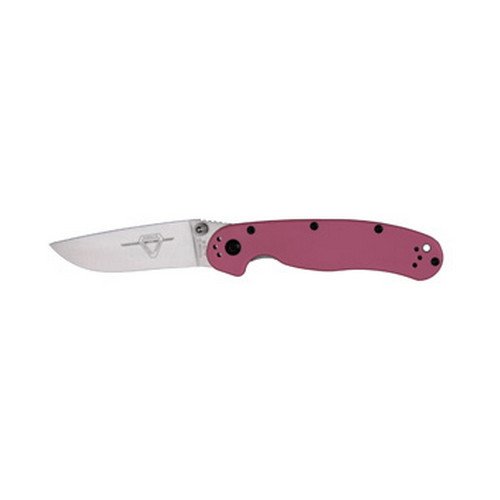 Features At A Glance of the Ontario Rat ii

The Rat 2 is the compact version of Ontario’s popular Rat Folder, designed as an EDC and backup knife. The price point is $35.95, but if you shop around you should be able to find one for $30 or a bit less (check this listing for the latest live prices). As you’d expect from a knife in this price bracket there are a few compromises to keep it on budget, but none of them are serious enough to prevent it being a highly competent tool.

This is a slim knife, which usually comes with a nylon handle and is fairly lightweight at 2.7 ounces. It has stainless steel liners which are not skeletonized, and could maybe have trimmed off another half-ounce. That’s not a big deal though. It’s still light enough to sit unnoticed in your pocket until it’s needed.

The liners are sandwiched between Zytel handle scales. The shape is quite ergonomic, especially if you’re using a normal saber grip. The outline fills the hand pretty well, and there’s a deep finger groove behind the pivot to help with control.

This is just as well, because the Zytel doesn’t have a lot of texture to it and isn’t an inherently grippy material to start with. Especially if it’s wet, the Rat 2 can be a bit tricky to maintain a grip on – but the handle shape does bring the grip up to adequate.

There are two carriage options built-in. The first is a good-sized lanyard hole at the pommel end. The second is a pocket clip, which can be mounted in four positions – left or right, and for tip up or down carriage. It’s held on with three hex-head screws. 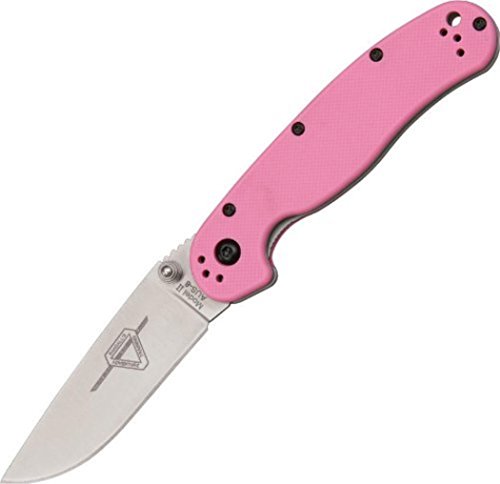 Ontario have gone with a standard liner lock in opposition to a frame lock, as on the larger Rat 1. The first thing you’ll notice is that it holds the blade very securely in the closed position. This is a safe knife to carry in your pocket; it’s not going to come open and slice your hand.

On the other hand you’re not going to be able to flick it straight open either. There are ambidextrous thumb studs to get it moving. The lock itself is positive and solid; there’s no play at all once the blade’s out. Ontario have done a good job here, especially for this price range.

The blade itself is three inches long, and the cutting edge is a quarter inch shy of that. The steel is just under a tenth of an inch thick, so you probably don’t want to try any heavy duty prying with it, but that’s rarely a good idea with a folder anyway.

There’s a slight drop point, and the front edge starts curving up quite late to give a strong point that’s still adequate for fine work. With the blade locked out its spine is raised slightly above the back of the handle, and there’s some very deep jimping on the angled rear section to give you a bit more control for fine work.

For a knife like this AUS-8 is a good choice of steel. It’s not expensive, but it’s tough and holds its edge well. It does need some extra care and attention, because while it’s a stainless steel the corrosion resistance isn’t as great as a more expensive alloy. Overall though it works well, giving decent performance at an affordable price.

There are a few cosmetic options available. The standard blade has a satin finish, but you can also go for a black blade. This feels like paint rather than powder coating but it’s pretty durable and looks good. There’s also a choice of handle colors – you can pick black, with either blade finish, or pink with a satin blade.

With the Rat 2 Ontariohave done a very good job of making a tough and workmanlike EDC blade knife at an attractive price. Yes, there are better steels out there, and a G10 handle would give better grip, but for the money the Rat 2 is pretty hard to beat.

Verdict: If you want a folder you can rely on, bit don’t want to break the bank, this is an excellent choice. 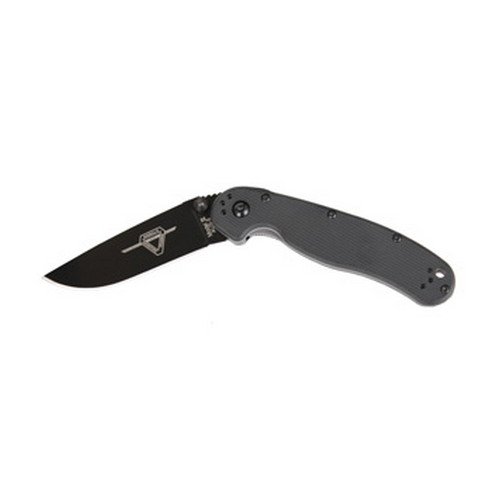 Ontario Rat 1 – If you like the style of the Rat 2, but prefer a slightly longer blade, get this one. There’s an extra half inch of steel, but it’s still compact enough to make a manageable EDC choice. Spyderco Tenacious – Between the Rat 1 and Rat 2 in size, the Tenacious has Spyderco’s distinctive leaf-shaped blade and thumbhole opening. It also has a G10 handle, but costs $15 more. Kershaw 1605CKTST Clash – If you like a serrated edge the Clash could suit you perfectly. The 3.1-inch drop point blade has an effective rope-cutting section, plus enough regular edge to handle most cutting tasks. On the bonus side, sharpening the Ontario Rat 2 Knife is very easy and you should do it from time to time with proper tools for it.

Where are Ontario Knives manufactured?

The Ontario company is founded in Naples, New York, and they are currently located in Frankville where they manufacture most of the knives. The Ontario Rat 2 knife, however, is being manufactured in Taiwan, along with some other military knives.

How do I sharpen my Ontario knife?

If you want to sharpen your knife, it’s best to take a sharpening stone a lubricate it beforehand. Always know the bevel angle of your knife, and keep it steady while sharpening.

Can I use Sandpaper to sharpen my knife?

Another great option for sharpening pocket knives is with sandpaper. Keep the knife at 22-degree angle while sharpening and keep your hand steady.