Our Garmin eTrex 20 Review – A Good GPS for the Money?

The navigation system built into your smartphone might be fine for casual use, but if you’re serious about outdoor sports you’re much better off getting a proper, dedicated GPS receiver. There are a lot of advantages to having a separate navigation device.

They’re usually a lot more weatherproof and robust than a phone, for a start. Most handsets use easily rechargeable batteries, so running out of power is less of an issue. They also generally have a lot more specialized features that come in useful for outdoor activity.

What exactly you’re looking for in a handheld GPS nativation unit is going to depend on what you plan to do with it. General backpacking and hiking use doesn’t call for the same features like a day out geocaching with the kids – you’ll probably be more concerned with battery life and route tracking features than cache software.

Small boat sailors want handheld GPS devices that are completely waterproof, while military and security personnel will be looking for compatibility with standard NATO map projections. Here are some of the main things to keep in mind:

It can be tough to pick the GPS that’s right for you – there’s a huge choice now, and while most of the better known models are competent performers it isn’t easy to find one that suits everybody. We’ve tested a wide selection and come up with what we think is the best all-round GPS on the market.

Since its introduction in 2000 the compact eTrex series has been one of Garmin’s most popular offerings and it’s stayed right up to date. Aimed squarely at backpackers and outdoor sports enthusiasts, eTrex models go from entry-level to mid-range devices – and at every price point, they have a lot more features than you can expect, such as an electronic compass, GPS tracker, hiking GPS, etc.

The Garmin eTrex 20 is widely seen as the standard to aim at in the sub-$200 GPS market, a title we think it definitely deserves. I 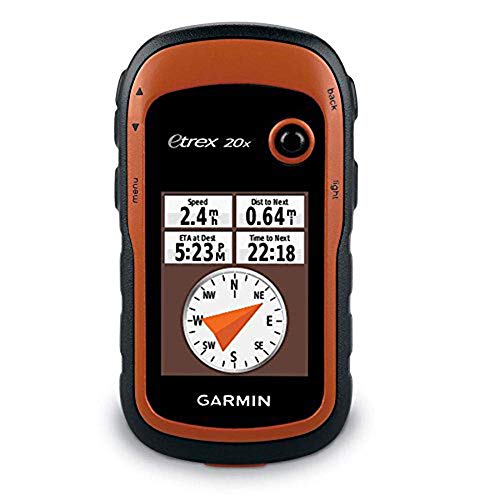 Buy at Amazon.com Buy directly at Garmin.com
We earn a commission if you click this link and make a purchase at no additional cost to you.
It’s a very compact unit at just four inches long and slightly over half that wide, and weighs only five ounces with a pair of AA batteries fitted.

It feels solidly made, with a tough case and rubberized coating. It’s rated as IPX 7 water resistance, which means it can handle being submerged for half an hour at a depth of one meter without any water getting in; that’s more than adequate for any activity on land and most water sports.

Spray, or even the odd whitecap, coming into the cockpit of your boat isn’t going to faze the eTrex 20; it shrugs off rainstorms like the proverbial duck. The back of the case features Garmin’s “backbone” attachment system, so mounts, belt clips and other accessories simply snap on. The battery compartment is securely fastened with a captive screw. It requires 1 lithium-ion battery

The screen is one of the two keys to the usability of any handset and the sTrex has an excellent one. In keeping with the size of the unit, it’s quite small, at 2.2 inches diagonally, but it’s sharp and clear. Resolution is 240 by 320 pixels according to Garmin, and it’s billed as sunlight readable.

We certainly didn’t have any issues viewing it in a variety of weather conditions, including pretty bright sunlight. This is one of the best small non-touchscreen high-resolution display we’ve seen on a GPS, especially at this price point.

The only gripe we have with the screen is that it’s not recessed into the case at all, so it’s practically the highest point of the device. Watch out for anything that could scratch it.

As well as a good screen you need a usable user interface, and the eTrex has this too. There are buttons arrayed round both sides of the case; on the left two small keys to let you zoom in and out, plus one that takes you straight to the main menu. On the right there’s a “back” key, to return to the previous page, and the power/backlight switch.

What you’ll use most, though, is the mini-joystick on the front of the device just above the right edge of the screen. It’s small but easy to use, and you can quickly hop round a page of menu options.

Once you get to the item you want a press on the joystick will select it for you. All the controls are rubberized and weatherproof.

That just leaves how well it works, and the answer is very well. Impressively for a handset at this price, the eTrex 20 can use the Russian GLONASS system as well as GPS, and the extra satellite imagery let it find its position noticeably faster than a GPS-only unit.

Once you know where you are you can enter up to 2,000 waypoints and 200 routes – there’s 1.7Mb of free internal memory, as well as a MicroSD card slot hidden under the batteries for loading additional mapping.

Buy at Amazon.com Buy directly at Garmin.com
We earn a commission if you click this link and make a purchase at no additional cost to you.
is stuffed with functions, including an almanac that gives you sun and moon data plus predicted good times to hunt or fish. There’s a proximity alarm that will tell you when you come within a specified distance of a location. You can even calculate the size of an area by walking round its perimeter.

One of the most popular functions, however, is probably going to be its ability to download paperless geocache files straight from your computer. Just plug it in with the supplied USB cable, install the Garmin plugin for your browser and you can send GPX files straight to the eTrex.

Once they’re loaded there’s a smartphone GPS app already in the menu that will list all your stored geocaches; just select the one you want and navigate to it. Data – including geocaches – can also be shared wirelessly between eTrex handsets.

The eTrex series were designed as primarily handheld GPS units, but don’t feel restricted. A variety of mounts are available, so you can easily fit yours to your bike, car or boat. With the right mapping installed it’s perfectly capable of doubling as an in-car satnav, although you won’t be able to run it off the vehicle power socket – it’s strictly battery powered.

Battery life is good, by the way, at up to 25 hours from a pair of AA cells – although the backlight will eat into this rapidly, so don’t use it if you don’t have to.

Verdict: A rugged and compact design, with a lot of features, the eTrex 20 is the best all-round GPS handset we’ve found so far. It has all the performance you need for just about any outdoor activity. To save a 5-10% of the list price,

Buy at Amazon.com Buy directly at Garmin.com
We earn a commission if you click this link and make a purchase at no additional cost to you.