We all need a small luxury on the trail. For some of us, it’s a thicker cozy pillow, an extra change of clothes or, in my girlfriend’s backing gear; it’s a selection of tiny pieces of cheese.

I’m a coffee guy; I don’t hit the trial without some beans, a grinder and my trusty mug. It helps me start the day and without it, I don’t enjoy my mornings on the trail while backpacking. The time in between getting up, and getting coffee is not the happiest time of my day. So a piece of equipment that gets me from stream to steaming cup with efficiency has always been top of my agenda. 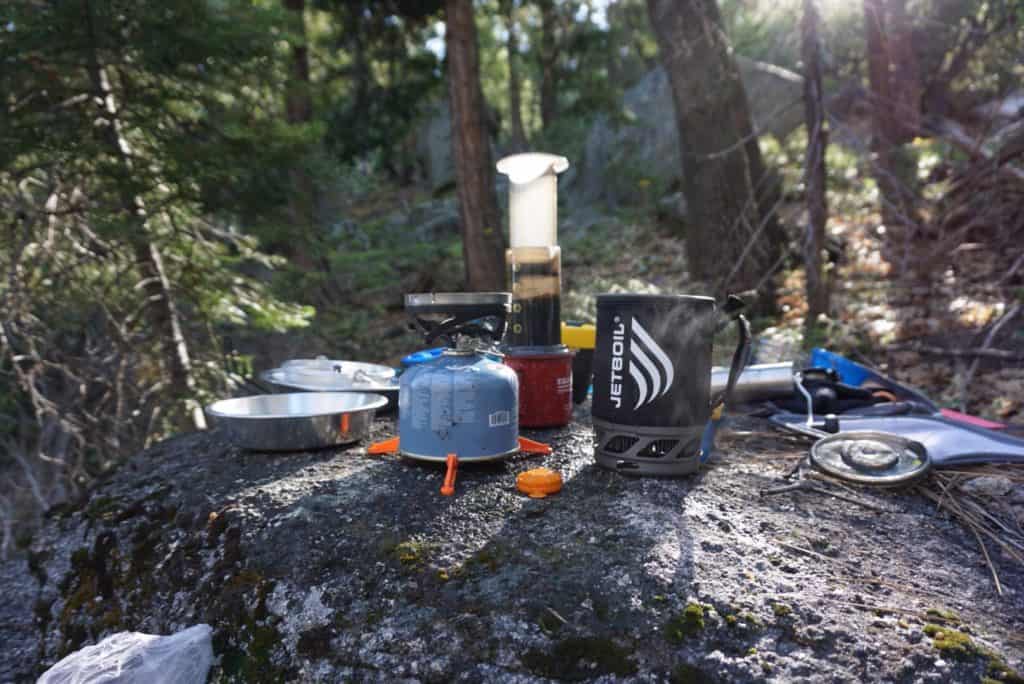 The Jetboil MicroMo in action for this review!

Recently I have been testing the Jetboil MicroMo and I couldn’t be happier with it and its ability to get a warm breakfast and a delicious brew in my system and myself on the trail much faster and with more efficiency than my previous setup.

Jetboil have become something of a go-to in the world of camp stoves, but I’ve never actually used one for a long period of time before. If we’re honest, I always cheaped out and used a small tin can stove, Trangia or a less costly gas stove to get boiled water during those cold backpacking nights.

I reasoned, as many of you will have done, that these other stoves were cheaper and lighter, great for a lightweight hike. But, when Jetboil burst onto the scene, I saw no reason to change.  What I forgot to factor in was time. I might make slightly faster progress with a lighter backing gear, but the faster boiling Jetboil got me on the trail faster, and often let me grab a cozy hot breakfast that I would normally skip.

I really respect the Jetboil company ethos, they designed a great product and have been chipping away at its errors for years. In an industry that is obsessed with product years and press releases, it is really nice to see the Jetboil folks diligently whittling away at their product. I, for one, am a fan of the results.

The MicroMo that I tested came with the stove itself, a 0.8L cup, a stand, a pan attachment and a French press adaptor, so you can bring your coffee press in your backpacking gear. Straight away, I was impressed with its sturdy construction and the fact that the cup also served as a storage container for all this equipment with efficiency, making for an easily packable stove.

With the addition of my usual cleaning cloth, I could keep all my cookware, and a small gas canister, inside the cup. This made transporting and finding everything a breeze when it was time to set up or break base camp.

In use, the Jetboil is very intuitive, just screw on the canister, click in the cup, turn the gas flow regulator, and use the included ignite to light it up, get a great flame and start boiling liters of water. The inclusion of an ignition mechanism is a really nice touch, it’s another thing to factor into your weight/ cost calculations.

My Zippo isn’t light or cheap. In my testing, I never failed to ignite the stove very quickly, even in some pretty heavy rain in Yosemite and windy conditions.

The best part of waking up

After ignition, I found the stove took just a hair under 2 minutes to boil enough water for two mugs of coffee, but you can still simmer if you prefer. This is, conveniently, about as long as it took me to grind the beans. Once this was done, I could drop the beans directly into the cup, stir them up and let them brew, quick and perfect for a cold wheater.

The handy French press adaptor packs down to virtually nothing and made some great trail coffee. After this, the cup’s non-stick surface made it really easy and with efficiency to clean out and knock up a quick bowl of water for oatmeal whilst we broke down the tent. First impressions were great. 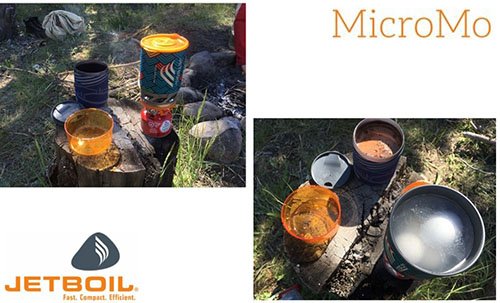 After a few months of carrying the Jetboil on all my backpacking lightweight trips, I am still a big fan, and definitely keeping it in my gear. I find that I don’t really use the pan adaptor much, most of my trips are multi-day and most of my food doesn’t require much more than boiling water. For rice, pasta, couscous, and oatmeal, I found the Jetboil’s included cup to be ample.

The flame regulation makes it possible to indulge in more culinary exploits should you wish to, but you’ll need to bring more propane than I like to carry on long cold-weather trips.

At home, I managed to adjust the flame heat enough that I could make delicious scrambled eggs, something I couldn’t do on previous generations of stoves with less heat control.

The Following is a video review (hands on) so you can see the MicroMo in action:

The stove is highly fueled efficient, with a small 100g canister of propane fuel lasting for a three-day trip in which we cooked two hot meals a day and leaving enough fuel for my weekly “coffee outside” meetings for a week or two after.

In my testing at home, I found it to use just 5g of fuel to boil 500g of water, this ratio is better than anything else I have tested and seems to be repeatable at all the temperatures I could subject it to, so you will be able to boil liters of water if necessary.

So, is it perfect?

Not quite, I did have some reservations after a long-term test: In general, the plastic lid serves as an excellent spout if you’re pouring boiled water of food from the cup into a bowl or a mug. A word of warning, however, be sure it is on tightly or it will come off and you will
get burned.

The subject of pouring brings up my only real issues with the MicroMo.

Jetboil says you can use the bottom stove cover as a bowl, and you can, but personally, I don’t like getting oatmeal in my stove so I decided against it, but it is personal, and you won’t have any problem with boil water. I found that the neoprene sleeve around the cup stretched a lot when I tried to use the handle.

It’s much more reliable to grab the whole cup using the insulating neoprene. This could be an issue for people with smaller hands. I also found that, when hot, it was very hard to remove the cup from the base without getting burned. It’s a bit awkward to pick up the cup, stove, lid, and cylinder, but that is what I ended up doing. Perhaps there is an easier way to disconnect it, but I couldn’t seem to find it. 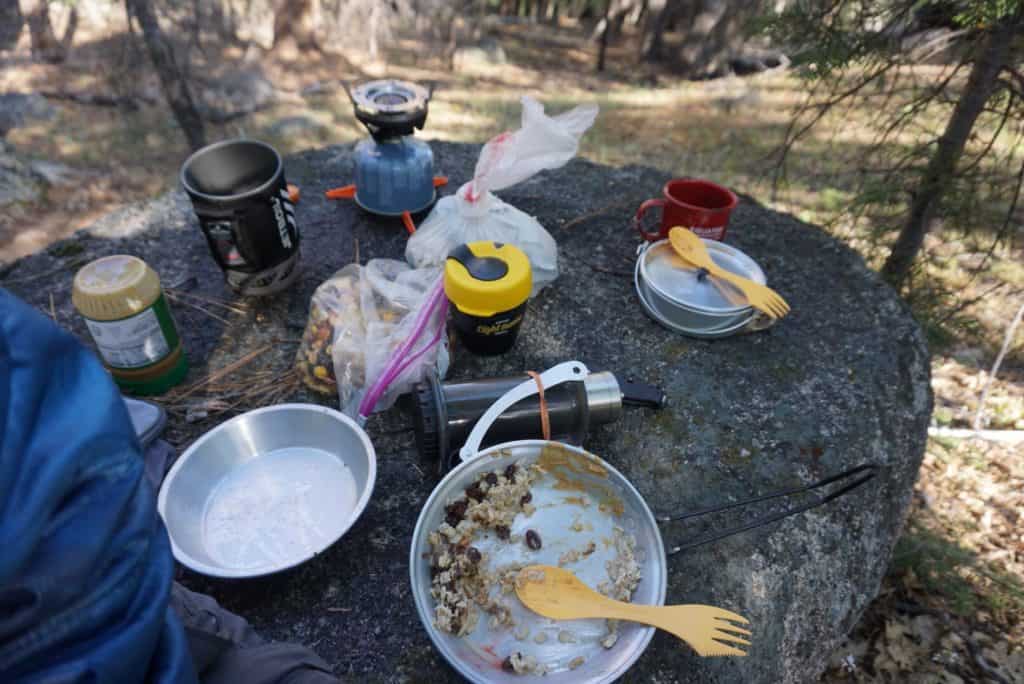 Can I use my existing cookware?

Yeah, kind of, but it might not work as well as the supplied cup. In practice, thick frying pans take a lot more fuel, but I don’t know many people who take them on trips that involve carrying your own gear, and this is where the Jetboil excels.

Some will be critical of the fact that the stove is less efficient with aftermarket cups, but I don’t really see this as an issue. You wouldn’t complain if your car went slower if you dropped in Diesel not gas, or your bike pedals didn’t work with other cleats.

You buy a Jetboil system, and it is designed to work as such.

Many will bring up the usual critiques of these “integrated canister” style cooking systems, which are mostly based on the earlier generations of the Jetboil. I had heard that such devices were not good for simmering and would boil over if you tried.

The newer generation, of which the MicroMo is one example, is much improved in this regard. The cup doesn’t require you to leave a lot of headroom for boiling water, and you can regulate heat enough to get a nice rolling simmer or subject your water to the full 6,000 BTU flamethrower.

I’m sure someone will comment that you can’t fly with propane canisters. They’re right. But I flew with the stove several times and grabbed gas at a local store on arrival. I like to support local businesses along the trail and don’t really see this as an issue.

As a bonus, I traded my leftover gas for beer on my way out of the park on a trip this summer!

The Jetboil has held up really well to a lot of abuse. I have crashed on top of it when bike packing. Dropped my pack a ton of times, washed it in every river and stream West of the Rockies, and boiled dozens of gallons of coffee. I was a bit concerned about the durability of the cup, but it remains undented and the non-stick coating is as good as the day I got it.

Bottom Line: You definitely get what you pay for, and although you could get a much cheaper stove, you won’t’ find anything as durable, fuel-efficient, adjustable, and well designed. 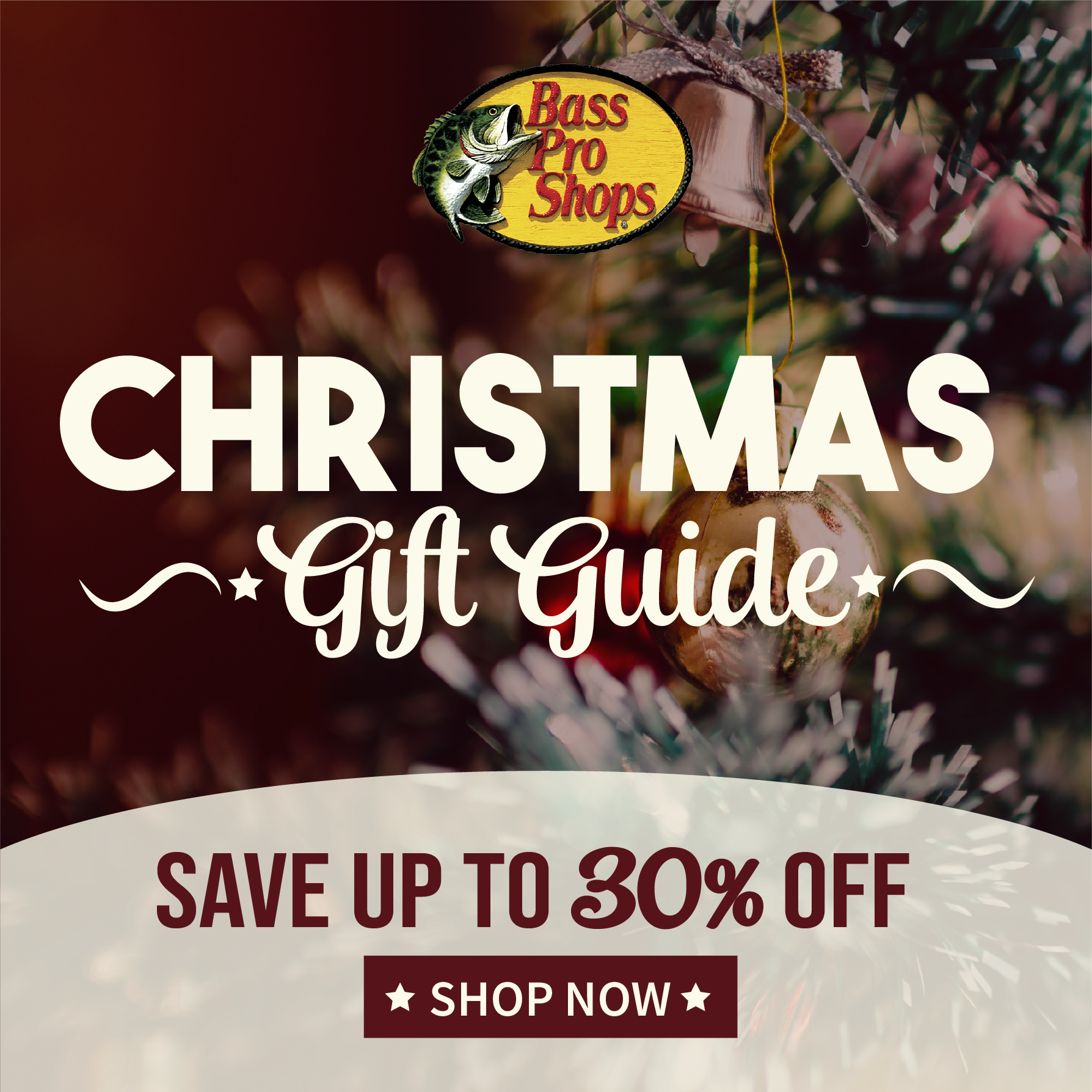 Bass Pro Shops is your trusted source for quality fishing, hunting, boating, and outdoor sporting goods. Get Amazing Deals on all Christmas gifts from clothing to camping and home gifts!

SHOP NOW
We earn a commission if you click this link and make a purchase at no additional cost to you.
Click here to cancel reply.