Winter Hiking Made Possible: Our Microspikes vs Crampons Comparison

Hiking in winter comes with certain challenges. You must select appropriate clothing to keep you warm and dry, especially when it comes to your extremities.

One of the important factors when preparing for winter hikes is your choice of footwear and footwear accessories. Aside from keeping your feet warm, you also need to ensure that you are able to maintain traction on snow and ice.

Staying on your feet is important, especially when you’re really out in the backcountry and medical help can’t easily arrive. A simple slip on a patch of ice can be dangerous enough on your sidewalk at home but can turn into a potentially fatal situation when you’re hours from help.

Boots designed for winter hiking are a must-have item and should be selected based on warmth, impeccable fit, and sole traction ability.

Keep in mind that even if your hometown doesn’t get a lot of snow or ice, if you hike up into the mountains you could very well find yourself facing much harsher conditions. Even if you rarely come across ice, it is better to be prepared than risk falling and injury.

Main Differences Between Microspikes vs Crampons

The main differences between Microspikes vs Crampons are:

What are Microspikes and Crampons? 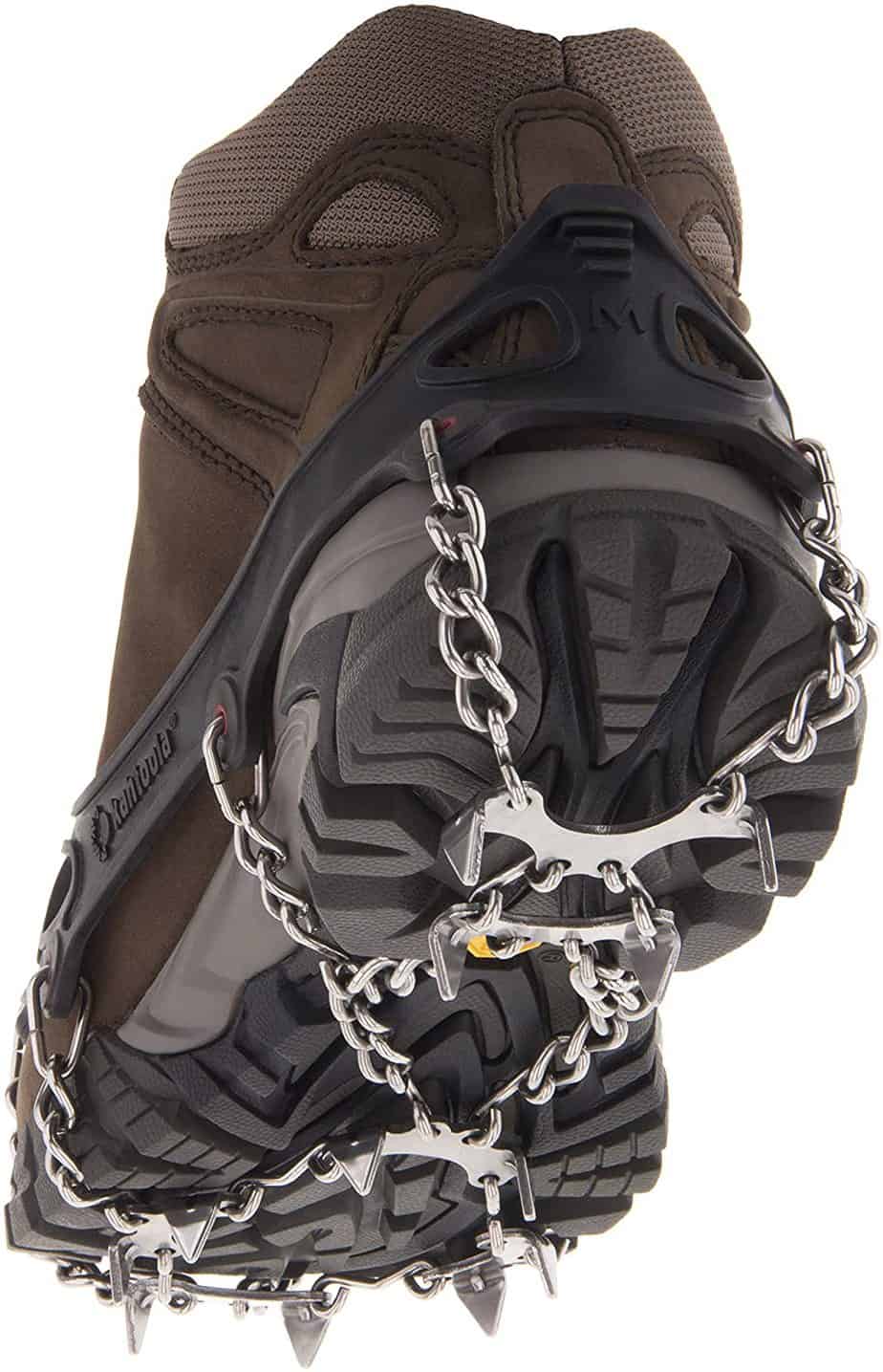 Microspikes and crampons are two types of tractions devices used for snowy or icy conditions. There are a few similarities between these two products, but also a couple of differences that will dictate when you should, or shouldn’t, use them.

Firstly, both microspikes and crampons are easily found at most outdoor gear retailers as well as from plenty of online sources. They are affordable and highly effective pieces of gear that can often be used for any type of footwear.

The incredible traction well-made microspikes and crampons offer to make them a necessity for anyone that has to travel through ice. In fact, microspikes are so useful that many wear them for more casual purposes, such as navigating icy sidewalks or while shoveling snow from the driveway.

The Purpose of Crampons

The most obvious difference between crampons and microspikes is the difference in spike size as well as the overall design. One look at a serious pair of crampons gives insight into just how severe of conditions they are appropriate for.

Crampons were originally developed by mountain climbers and mountaineers in general that needed something to strap to their feet that would allow them to gain traction on ice and snow. It’s one thing to try and stay upright on a flat surface, but getting a grip on a slope or mountain requires the utmost durability and intensity.

Climbing crampons are the classic choice, but clearly not the right one for hiking. Fans of climbing crampons realized that the overall design would be promising on icy trails as well.

Hiking crampons also referred to as trail crampons, have the same overall design and purpose as their climbing cousins, but feature fewer and less aggressive spikes.

The number and length of spikes obviously vary between manufacturers but typically they have 8 to 12 spikes in total, all of which vary in length from ½” up to ¾”, sometimes more or less.

Spike placement is just as vital on crampons as the spikes themselves. The layout of the spikes allows a natural toe and forefoot focus while hiking up icy hills.

Crampons do require training to use safely as the spikes do pose a potential safety hazard for the beginner. Still, with some basic training and caution on the trail, hiking crampons are the most effective accessory for getting up and down icy elevations safely.

When to Choose Microspikes

Occasionally crampons are a bit overkill for your particular hike. The severity and length of the crampon spikes really reserve it only for extreme ice and snow, particularly on slopes.

When you’re only dealing with small amounts of ice and snow then microspikes are a much better choice. They offer excellent traction, far better than any winter boot sole, but are also more versatile.

Microspikes are often more affordable and will also fit non-boot footwear choices, such as trail running shoes. You can also jog or run in microspikes, which is not a safe thing to attempt in crampons.

Another advantage of microspikes is their use of heavy-duty chain and fewer, shorter spikes mean that they can safely be used when the trail has a muddy or rocky patch. Microspikes are ideal for hiking as well as casual use for these reasons.

Typically microspikes are a bit hardier than crampons, as the former requires more upkeep and spike sharpening.

Well-designed microspikes aren’t apt to rust and can be easily kept in your car for those times in winter when you may need to get out to change a tire or shovel snow. They are usually more affordable, but also tend to offer a more universal fit. This means those with very large or very small feet may have trouble finding a size that stays on while moving vigorously.

If you are hiking on flat land, walking around town, or doing some other outdoor activity that isn’t on a slope, chances are microspikes will be all the extra help you need when it comes to traction.

This tool is so handy that many consider it a necessity for anyone living in a region that gets snow. Even if you do have crampons or need crampons for your more intense hikes, it’s still worth it to purchase and take along microspikes as another option. 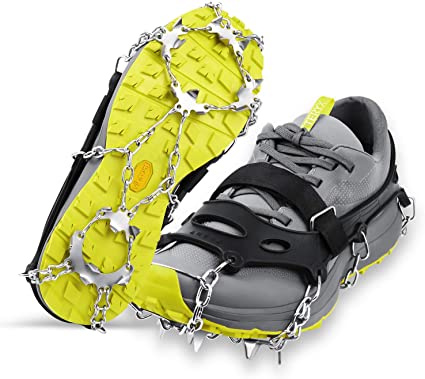 Shopping for microspikes and crampons is easy. During the winter season, you can likely find them in-stock at any of your local outdoor stores. Another option is to purchase online directly from the manufacturer or from a retailer. Shopping in stores is a nice choice, however. This allows you to bring in your boots and try the product on.

The most important thing to consider when choosing either piece of gear is the fit. You must ensure that the model you choose is made of durable materials and checks out as a secure, safe device. It can be an annoyance for microspikes to pop off your shoe while walking but could be downright dangerous if your crampon comes off on an icy mountainside.

If you are a backpacker keep in mind that there are ultralight aluminum microspike and crampon options for when weight is a concern. These choices are still very tough, though it may be trickier to find microspikes with aluminum. Steel and titanium are heavy materials but do offer the greatest strength.

Another consideration for when you’re shopping is to keep a reasonable idea of how much traction help you really need. Spending big bucks on an advanced pair of crampons may be exciting, but also a potential waste of money if you rarely ever traverse steep, icy hills.

Overly large spikes can even make you more likely to fall. If you are a hiker you should also consider that super bulky, durable models might be overkill and tire you out far more quickly than a modest, useful pair of microspikes.

Keep in mind that if you’re struggling with sinking into the snow, neither microspikes or crampons will help you with this issue. Instead, you will need snowshoes, which effectively spread out your body weight and allow you to stay up on the snow’s surface.

If you are dealing with crusty snow and ice, search for more aggressive snowshoes that also have built-in crampon-style spikes on the bottom.